Using Gulp while Publishing to CRM. 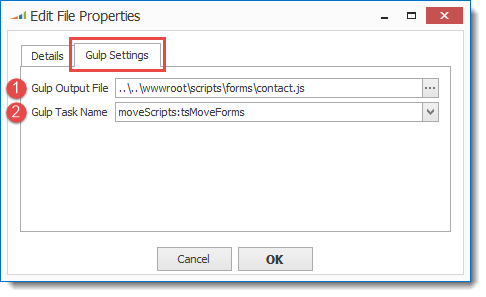 Note:
When the dialog loads, XrmToolkit will attempt to run the Gulp file found in the project. If none is found, or the Gulp file has any errors, then you will not get a dropdown showing all the available Gulp tasks. Please ensure that a Gulp file is present and configured property before trying to use this feature.

XrmToolkit also passes the following two parameters to the Gulp command line that you can use within your Gulp task.

Using these parameters allows you to create re-usable tasks that can be used for any file. An example is shown below demonstrating a Gulp task that simply moves both the source and jsoutputfile to two different locations. Most likely your tasks will contain more logic to minify or combine multiple files into a single file.

Note:
In order to use either of these parameters, you will need to use a Gulp plugin that can read the command line args. One such plugin is Yargs, which is used in the example above.